The implementation of the Common Core State Standards for Mathematics (National Governors Association Center for Best Practices & Council of Chief State School Officers, 2010) has the potential to move forward key features of standards-based reforms in mathematics that have been promoted in the United States for more than 2 decades (e.g., National Council of Teachers of Mathematics, 1989, 2000; National Science Foundation, 1996). We believe that this is an especially opportune time to purposely focus on improving the mathematics education of students who have historically been denied access to a high-quality and rigorous mathematics education in the United States, specifically low-income students and students of color (e.g., Kitchen, DePree, Celedón-Pattichis, & Brinkerhoff, 2007; Leonard & Martin, 2013). We discuss a challenge to realizing standards-based reforms in mathematics in the United States: computer-based interventions in mathematics classrooms.

Journal for Research in Mathematics Education 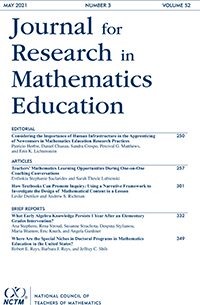 Copyright:
The National Council of Teachers of Mathematics, Inc. All rights reserved. 2016